Number of testo and analysis

From the outset we designed Synnuclist in a way that could help it become a three-wheel, safe, light and at the same time durable solar vehicle, whith a unique driving range, a vehicle that could offer its three passemgers a comfortable ride.

The whole concept is based on simple yet fundamental scientific principles. Through simplicity but also extensive study, the Sunnyclist exceedingly exploits both solar and human energy thus opening new horizons in sustainable mobility.
The way the Sunnyclist functions along with the requirements of photovoltaic technology, determine the vehicle’s design. 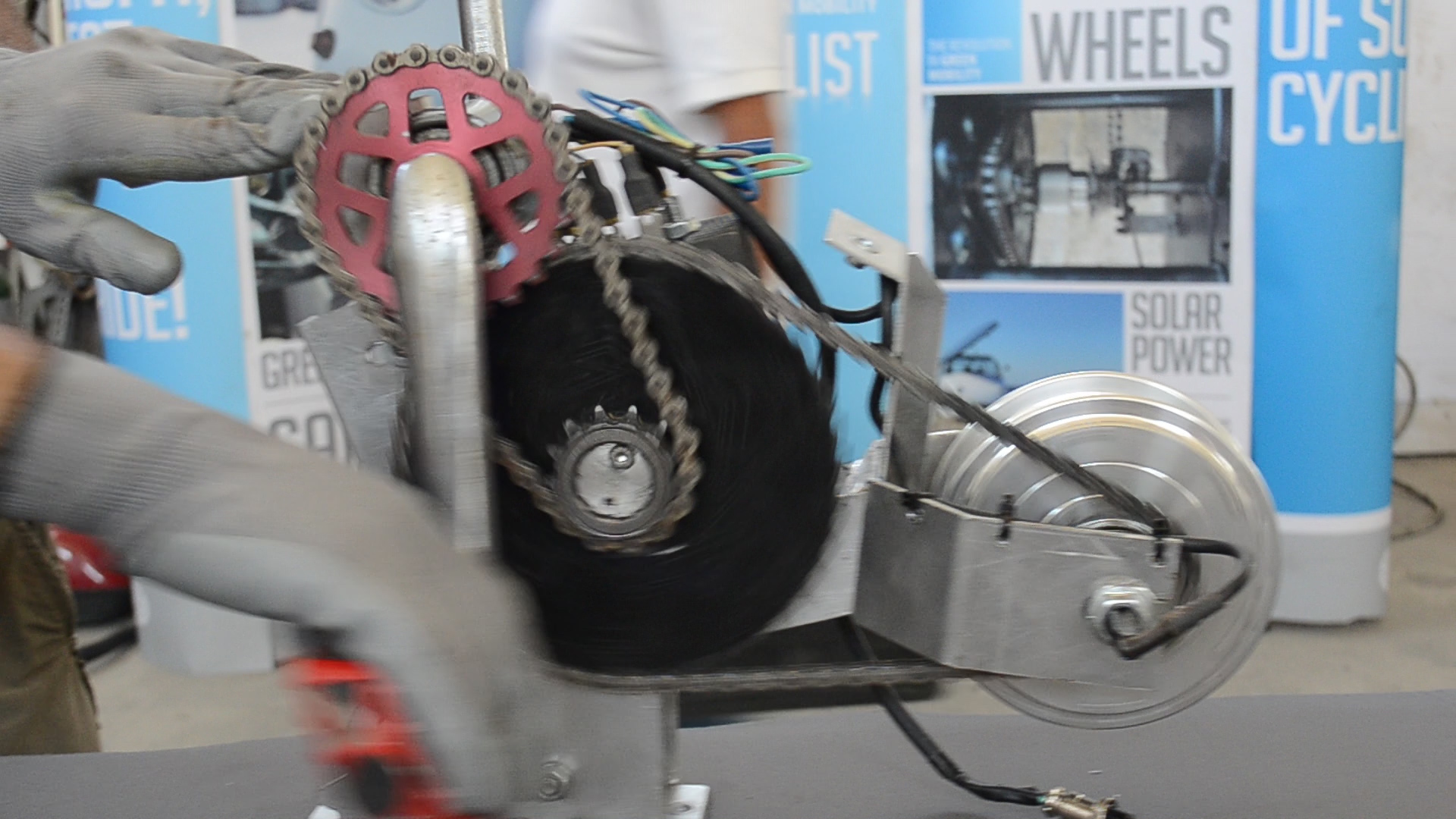 
The engineers of Sunnyclist made the strategic choice of extending it’s driving range not by using a stronger battery but by using in tandem the solar energy and it’ s passenger’smuscle power. The Energy produced by solar and human power is more valuable from the energy stored in the battery:
Longer life time. Lithium batteries which are used in BEV have a life expectancy of 10 years, while solar cells last more than 20 years. In addition the solar generator ensures smaller charging cycles of the vehicle’s battery, thus extending its lifetime.
Higher power density. The power density of a solar generator, for countries like Greece, can reach up to 125wh/kg while a LiFePO4 battery pack used in most electric vehicles has a power density of 80 wh/kg and a lead battery pack used in golf carts has a power density of 30wh/kg.
Cost efficiency. Supposing that we are in a country with medium sunshine, like those of Central Europe, Sunnyclist’s solar roof produces 2 kWh/day or at least 15000 kWh during its life. The cost of a solar roof is similar to that of a 2 kwh LiFePO4 battery. However the battery has to be replaced at least once and the cost of charging it is significant. . A 20 years cost analysis shows a profit of about 5000€ while in countries with plenty sunshine like those of south Europe, Middle East, USA, and Australia the user can save up to 17500€.
Clean energy. The 12.500 to 35.000kWh (depending on a country’s sunshine levels) that are produced from Sunnyclist’s solar generator result in an up to 15t CO2 emission reduction, as this would be the emission of CO2, had we used European Union’s electricity system to produce this amount of energy.
Freedom-ease of use. The vehicle can move freely regardless the available electro mobility infrastructure, because it can produce enough energy for most of our daily transport. On the contrary, conventional electric vehicles need to park near chargers thus restricting the user’s freedom of movement.
Greater Autonomy. The amount of energy produced by the solar generator is added to the vehicle’s battery pack energy, thus increasing its autonomy. Therefore Sunnyclist offers an increased autonomy in respect to other competitive vehicles, while maintaining the advantages of a small battery pack.
X
Share this
Subject:
Message: